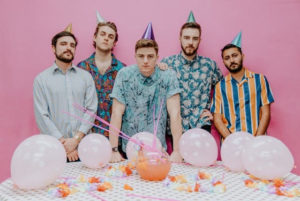 British indie band Only Sun, has released the music video for their latest single “Vice.” Talking about the video the band says, “As we sat around the discussion table, coming up with dreadful idea after dreadful idea for the ‘VICE’ music video, a concept was born. Why not let the viewer see behind the looking glass? Why not allow the viewer behind the scenes, to experience the pain, misery and carnage that is the foundation of every Only Sun music video? Armed with a camera, five woeful ideas, and a children’s face-painting kit, we present the official music video for ‘VICE’. The sum of the parts is always greater than the whole…”