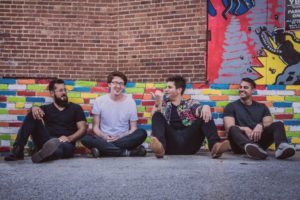 Cleveland rock band Ottawa has released the music video for the single “No More Love Songs,” which premiered a few days ago over at Billboard. Inspired by the idea that 21’st century dating can be difficult (if not impossible) front man Dale DeLong has the following to say about the song.

“I got to really thinking about what my dating life has been and how things are in this generation with the dating apps and things like that for people in their 20s and early 30s now,” explains Dale, on the concept and writing of the song. “My wheels were turning about it for awhile then sometime last summer I was driving and I just sang the chorus. Some of it might come across as cheesy, but it just felt really good off the tongue. So I brought it to the guys and we did our thing and Will (Hooper, guitarist) came up with an awesome riff and we built the song out of it. I think we all sensed there was something super special about it and something kind of immediate.”