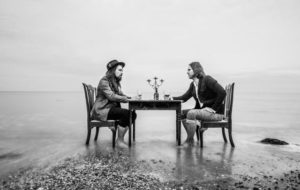 British rock and folk band Percival Elliott has dropped their new single “Forever,” which you can check out below. The band is named after member Olly Hite’s grandfather Percival Elliott, who was born in 1883 and built the first ice cream emporium in Brighton, England. The song appears on the duo’s first album Save Your Soul, bringing together influences such as Jeff Buckley, The Beatles, and Father John Misty.