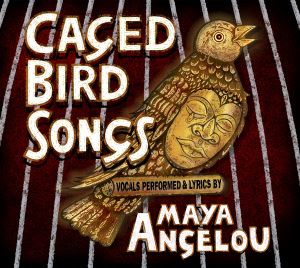 Caged Bird Songs, a spoken word album featuring the words of late writer and poet Maya Angelou, has been put against funk, surf rock, and hip hop music and was released on November 4th. The vocals are taken from recordings that Maya had previously recorded. Angelou, who passed away in May at the age of eight-six, released four spoken word albums and five recordings over the course of her career. While this album has been put together by her estate, Caged Bird Songs provides an interesting backdrop to her words. While some fans have criticized the new release as diminishing Maya and her talent, as the choice of music was thought to be cheesy, it actually fits her words quiet well, as we get to hear her speak through different genres of music, as her voice flows with each one beautifully. On tracks such as “On Aging” we get to hear Angelou speak through heavy auto tune, which adds a modern twist to Maya’s writing, as her poems and writings can appeal to a new generation, while still being enjoyed by the fans that have been there since the beginning.