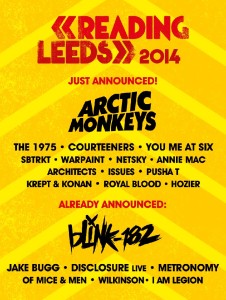 50 new bands have been announced for the Reading and Leeds festival taking place in England. Read the press release below.

Reading & Leeds Festivals have announced another 50 amazing additions across the stages set to join the FOUR Festival headliners Queens Of The Stone Age, Paramore, Arctic Monkeys and Blink-182 for 2014. With just 12 weeks to go until the gates open for everyone, this year looks set to be the strongest yet with the best of UK and world talent across rock, indie, dance, alternative, grime and hip-hop. Reading & Leeds Festivals are the best way to spend your August Bank Holiday weekend!

Over on the NME/Radio 1 Stage headliners Disclosure, Courteeners and Bombay Bicycle Club are joined by ex-My Chemical Romance front man and previous festival headliner Gerard Way in his first ever solo UK show, hip-hop heavyweight and Kendrick Lamar collaborator Schoolboy Q and the soulful vocal and cutting rap delivery of Maverick Sabre. Also playing will be Aussie thrash-pop duo DZ Deathrays and emotive screamo titans La Dispute.
Reading & Leeds have a burgeoning reputation for bringing the best in electronic music and cutting edge dance to the Festival and the additions of the incredible Sigma, Indiana, RÜFÜS, Panama, Kove, MØ, Lxury and Billion prove that this trend will continue.

Punk and rock have a strong heritage at Reading & Leeds and last year’s addition of a rock day added to the Lock Up Stage acknowledged that. Now announced alongside incredible headliners Jimmy Eat World, Gogol Bordello and Of Mice & Men are We Came As Romans, Crosses, Muncie Girls, Brutality Will Prevail, Lesser Key, The HELL, Beasts, Masked Intruder, Emily’s Army and Vales.

Providing a place to see upcoming acts alongside some real heavy hitters, the Festival Republic Stage is looking as strong as ever. Headlined by Palma Violets, Band Of Skulls and Augustines, now King Charles, Southern, We Are Scientists, The Amazing Snakeheads, American Authors, Little Matador, The Minutes, Leaders Of Men, The Sunshine Underground, The Pains Of Being Pure At Heart, Sivu, Drowners, Lucius and Saint Raymond have all joined the line-up.

With the line-up continuing to grow, Reading & Leeds Festivals are once again an essential stop for music fans this summer.