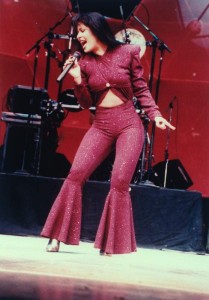 20 years ago today, Mexican-American singer Selena was murdered by the president of her fan club, Yolanda Saldivar, of San Antonio, Texas. Saldivar was hired to manage Selena’s clothing boutique Selena Etc. but was fired several weeks before the shooting, as the singer’s family discovered that Saldivar was embezzling money from the company. When Selena demanded that she return the boutique’s financial documents they agreed to meet up at a hotel in Corpus Christi, Texas. Once at the hotel, Saldivar refused to return the documents and shot the singer. She received life in prison, though she is eligible for parole in 2025.

You can read more about Selena’s life and career here.