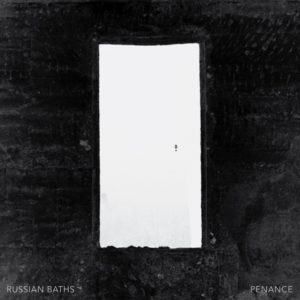 On Russian Baths new four song EP Penance, fans are greeted with high energy tracks and atmospheric tones that brings a new edge to noise rock, the band’s chosen genre. Opening with “Slenderman”, the Brooklyn based group gives their audience a great introduction to who they are as band as drummer Jeff Widner plays drum fills that light up the song. With complex notes and eerie sounding bass lines from bassist Evan Gill Smith, “Slenderman” is a number that fits as the opening track of Penance. Next, we have “What’s Your Basement,” a two-minute barrage of noise that ultimately doesn’t fit with the rest of the EP. While it feels like the rest of Penance  has sense and rhythm to them, “Basement” seems to act more like filler, rather than something the band was excited about releasing.

“Poolhouse” is another tune from Russian Baths to garner praise from various music magazines and blogs. Agreeing with the good word that’s comes the bands way, “Poolhouse” is a well-done track that washes over listeners, with its memorable hooks and sound. To close out Penance, Russian Baths includes “Black Cross,” another musically minded track that is a great addition to the too short EP. While it last less then twenty minutes, Penance is a great debut for noise rock’s newest band that is anxious to make their mark.

Listen to “Poolhouse” below.