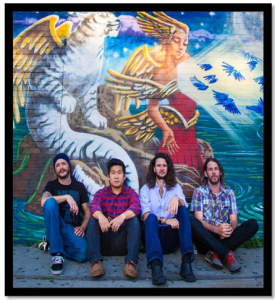 RX Bandits have released their single “Stargazer” from their upcoming album Gemini, Her Majesty which you can listen to over at their Soundcloud. You can read a press release about the album’s release below, as well as view the bands upcoming tour dates starting in July with The Dear Hunter.

BAND TO KICK OFF NORTH AMERICAN CO-HEADLINING TOUR WITH THE DEAR HUNTER JULY 11 SHOW AT THE STATE THEATRE IN ST. PETERSBURG, FL

June 17, 2014 (Los Angeles, CA) — Orange County, CA-based metamorphic rock group RX BANDITS have announced a July 22nd release date for their seventh and much-anticipated new studio album, GEMINI, HER MAJESTY (Mash Down Babylon/INgrooves). The album is available for pre-order at pledgemusic.com/RxBandits and https://itunes.apple.com/us/album/gemini-her-majesty/id888449585?ls=1, with “Stargazer” as the instant grat track.

“In the past, our aim was to bridge the gap between our recorded music and our live performance,” says vocalist/guitarist Matt Embree. “But this time around we really didn’t ever consider that. We almost willingly ignored it. It was really nice to make a record that we didn’t apply live performance constraints to. That said, now we’re going to have the hefty task of figuring out how we want to arrange and play these new songs live. We love the challenge.”

Over the course of the past 19 years (yes, 2015 will be their 20-year anniversary), RX Bandits have managed to stay light years ahead of the pack by taking a genre-blurring approach to songwriting. Their adventurous style of play gives them a unique sense of flexibility, one that allows them to seamlessly fit anywhere and everywhere, from the main stage at Bonnaroo and Coachella to Bamboozle and Reading. Their songs have been featured in video games (Guitar Hero, Rock Band), used as the backdrop for ESPN’s X Games and continues to be religion for their legion of diehard fans around the world.

On July 11th, the band (Embree, keyboardist Steve Choi, bassist Joseph Troy and drummer Chris Tsagakis) will kick off their headlining tour of North America with a show at the State Theatre in St. Petersburg, FL. The tour, which includes co-headliner The Dear Hunter, will see RX Bandits playing a mix of new material and classic tracks.

Tour dates are below. Please let me know if you’re interested in going to a show, setting up an interview or need a review copy of GEMINI, HER MAJESTY.