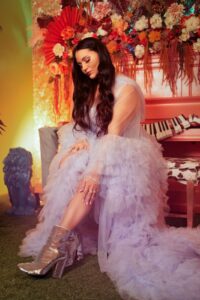 2020 American Idol contestant Sabrina Monique has released her latest music video for the single “Sideshow,” which you can check out below. Influenced by artists such as Joss Stone, Amy Winehouse, and Dua Lupa, Sabrina has been featured in Wonderland Magazine and Clash Magazine. Sharing what filming the “Sideshow,” music video means to her, she says ““‘Sideshow’ is a song that was a long time coming. I wrote it during a period of my life when I was on an emotional rollercoaster. It took me almost a year to write & record this piece. I wrote it and re-wrote it so many times it’s not even funny. I was lucky enough to collaborate with Producer/Writer Dr. Ford to help me bring it to life.  We spent a lot of time in the studio trying many different sounds and ideas because we were so passionate about this song. I am so excited to release the music video & see the song come to life. “