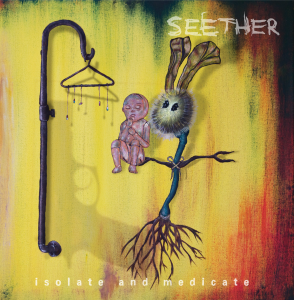 On Seether’s new album Isolate and Medicate, we hear an album that is very listenable with some high points, though there is nothing in the music that makes the record unique. First forming in 1999, in Pretoria, South Africa, Seether released their first album Fragile under the name Saron Gas. A year later, the group changed its name to Seether and released their first official album called Disclaimer which gave the band worldwide recognition. The band has since released three more albums including Disclaimer II (2002), Karma and Effect (2005), Finding Beauty in Negative Spaces (2007), and Holding Onto Strings Better Left To Fray in 2011. All throughout their career, their guitarist Shaun Morgan has made it known that he is a huge Alice In Chains fan and that he has used their music as a template for Seether’s style and sound. While Seether has released strong music in the past, on Isolate and Medicate, it feels like Alice In Chains are releasing a new album, as both Seether and Alice In Chains have sounds that are extremely similar. After listening to Isolate and Medicate, the record doesn’t demonstrate why we should dig deeper into the bands catalogue or why we should stick around for future releases.

The album’s opening track “See You At The Bottom” has a solid opening with chugging guitars and clattering drums. From the beginning, we hear that the bands front man Shaun Morgan can sing, though he sounds so much like Alice In Chain’s former front man Layne Staley that it’s hard to discern which vocalist is actually singing. Despite this flaw, the band plays together very well, and whether their purpose on the album was to resurrect grunge music or not, the group still has solid musicianship. “Same Damn Life” the records next tune, is a solid track that features Shaun screaming the lyrics, though while it still sounds very reminiscent of grunge, the song has a guitar riff that will get stuck in your head almost instantly as the heavy distortion adds to the songs biting edge. “Crash” is a track that would do well as a single since it has a slight pop vibe to it, and Shaun ditches the screaming on this track and actually sings, giving the song a more delicate quality, though in the chorus, the band heads straight into becoming heavy once again. After awhile the changes in tone get a bit tiring since it doesn’t give the music much variation, causing fans (and any newcomers) to lose interest in Seether’s new material.

“Nobody Praying For Me” the album’s eighth song is the darkest sounding track on Isolate, and is by far the most emotive performance wise. The song has very much the same sound as previous tracks, and the song has a very repetitive feel to it, with a tempo that makes the song feel like its plodding along. The album’s closing song “Save Today” is a tune that flits from an acoustic opening to a heavier chorus, something that was typical in grunge when it first became popular in the 1990’s. Upon first listen, the intro to the track has a pretty quality to it, and we think the band are about to slow things down a bit. We then feel let down as the band launches into the same heavy delivery that we have heard since the beginning of the album.

Overall, Isolate and Medicate becomes a chore to listen to, since the band offers nothing that sounds new. While there is nothing wrong with having influences show up in your music, having an identical sound does nothing for the growth of the band, whether it is musically or stylistically. Seether should come back and try again.