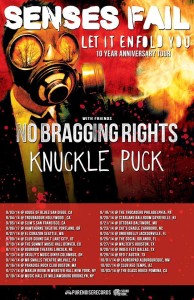 Senses Fail have announced a 10th anniversary tour celebrating their album Let It Enfold You. Chris Hornbrook of Poison The Well will playing drums for the band. No Bragging Rights and Knuckle Puck will be opening for the band.

You can view the press release and tour dates below.

Senses Fail has announced they will be embarking on a national headlining tour in celebration of the 10th anniversary of Let It Enfold You. Supporting acts include No Bragging Rights and Knuckle Puck. Presale tickets can be purchased here with public on sale June 5th 12pm local time. All proceeds from presale tickets will go to The Best Friends Animal Society (www.bestfriends.org). A full list of tour dates and more information can be seen below.

Buddy Nielsen, founder and lead singer of Senses Fail says about the tour, “I am humbled and excited to be able to play these songs, some which have never been played live. I look forward to reliving moments in my life with a room of people who are doing the same.”

Let It Enfold You holds a special place with Senses Fail, as it was their first full length release which also peaked at #34 on the Billboard Top 200 chart and sold more than 400,000 copies to date.

Nielsen had the following to say about Let It Enfold You,

“I have spent the better part of my life pursuing a dream and now, purposely, to look back and clearly be able to see the peaks and valleys, the difficult personal times, the relational sacrifices that were made, as well as the joy, excitement, youthful ignorance that was painfully present at times. It is all very outstandingly grounding and fills me with equal parts nostalgic joy and gratitude for everyone that has shared in this band, past present and future, band member or business partner. We were all very young when we wrote and recorded this record in a half recording studio, half go go bar, run by the Russian Mob in Dover, NJ. None of us could have imagined the places it would take us, to now retrace those steps back in time, is a little frightening but more so exciting. I have very fond memories of the journey that was started with the record and I truly have deep love for everyone that was involved. All of us have gone separate ways but we will still forever share a bond, a record that has its own life and will stay unchanged for the rest of time.”

Senses Fail, consisting of Buddy Nielsen (lead singer), Zack Roach (guitarist), Matt Smith (guitarist), and Gavin Caswell (bass) are also excited to announce they will be bringing Chris Hornbrook of Poison The Well on the 10th anniversary tour this fall to play drums with the band.

Nielsen says, “We are also very, very stoked to announce that Chris Hornbrook (Poison The Well) will be jumping behind the drums and lending his talents to Senses Fail. We couldn’t be more pleased to have such a wonderful drummer replace our very dear and close friend Dan. We wish him the best of luck and happiness in his future pursuits and in his life.”