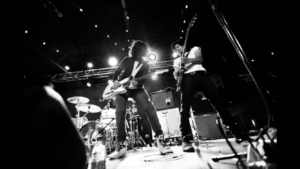 CRX, the latest project from The Strokes guitarist Nick Valensi, will be performing at Emo’s in Austin, Texas on December 10th as part of their tour supporting their new album New Skin. New York acts Streets of Laredo and band Hideout will be opening. You can watch the music video for CRX’s latest single “Ways To Fake It” below. Get your tickets here.

Update: The show has been moved to Stubb’s Jr.