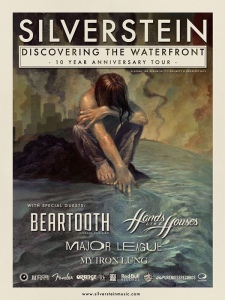 Silverstein have announced that they will be heading out on a 10th anniversary tour to celebrate their 2005 album Discovering The Waterfront. They will be bringing out Beartooth, Hands Like Houses, Major League, and My Iron Lung for support. A press release can be found below along with tour dates.

Post-hardcore band Silverstein has announced a winter tour to celebrate the 10th anniversary of their 2nd full-length album, Discovering The Waterfront. The band will be touring North American in January and February 2015, playing the album front to back along with greatest hits and brand new songs. Fans can purchase VIP bundles (featuring early access to new music) and general admission tickets to the Discovering The Waterfront 10-Year Anniversary Tour here: Silverstein.SoundRink.com.

In honor of the 15th anniversary of the band, Silverstein’s has altered their website to resemble their original Myspace page. Fans can visit the page here: http://www.silversteinmusic.com/, and follow the hashtag #DTW10 on twitter/instagram, for more information on the upcoming tour.

Vocalist Shane Told shares, “10 years later we still feel so passionate about Discovering The Waterfront. A lot of times as a musician you go back and listen to your old work and wish you could change some things, but with Discovering I still feel like everything is in the right place.” He continued, “It was a special record where everything came together so well. For both us and our fans, we grew up with these songs and now to be together under one roof all celebrating them is going to be a special, once in a lifetime event.”