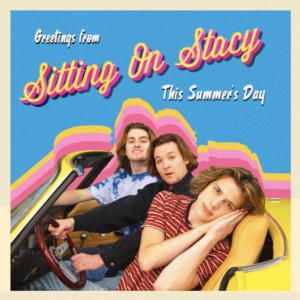 Southern California band Sitting On Stacy has shared their latest music video for the track “This Summer’s Day,” which you can check out below. Talking about the music video and the song, the band says, “The first line of the song inspired the video: ‘I love it when you twirl your hair when we’re watching a movie.’ We wanted there to be a supernatural quality with what was on the TV to be having glitches and changing between different movie genres. We wanted a cool music video with a funny twist where nothing was taken too seriously.
We wanted the darkness of the night and eeriness of the unknown with the UFO to contrast what the song brings, namely the anticipation of summer fun and a free spirit.”“We shot it in a week and a half and used parts of our house and our backyard for the main locations. We drew a story board animatic to the music and shot it shot for shot. The campy western scene was hilarious and by far the most fun to shoot because of our outfits and our non-professional acting skills. We hope everyone enjoys the video!!”

If you are in the US, you can catch the band on tour with The Aquadolls, starting March 10th in Santa Ana, California and going until April 16th in San Diego, California. You can see all dates below. 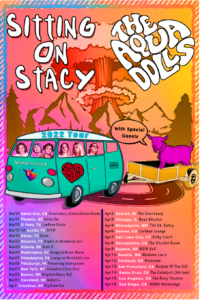