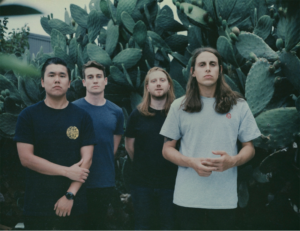 Slowly, Slowly has debuted the music video for “Ten Leaf Clover” which you can check out below. The band will be releasing their album St. Leonards on May 11th.

Talking about the inspiration behind the song, front man Ben Stewart says, “This song is about searching for true connection in an age where it seems so hard to find. It’s a modern-day love story – Romeo & Juliet, but with the internet. “It was initially inspired by my friend Anna Jay’s voice, I heard her sing and could hear this little duet brewing in my head. I threw a bunch of experiences of my own and of my closest friends into a mixing pot to try and detail the difficulties of remaining honest and hopeful in what can be a pretty demoralizing quest.” “I came up with the video concept while running and listening to the song, I had my arms out wide kind of moving them like I was a kid pretending to be a plane and I was like, ‘rollerskates. Yes. Rollerskates.’. We reached out to Nicole Slovak to be in the clip after seeing some of her amazing performances – she had this sense of grace and sadness, a considered confidence that was really captivating. It all came together way too easily.”