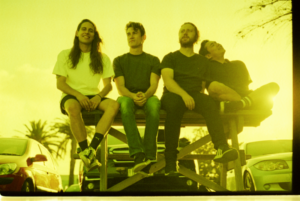 Australian pop band Slowly Slowly has released the music video for their new single “Jellyfish,” which you can watch below. Chatting about the track front man Ben Stewart says,“It came together so easily and we spent the whole day laughing.” “As soon as we laid the music over the top of the video it immediately brought out the sentimentality of being in love and not giving a fuck what anyone else thinks.” “I think at surface level you hear the Jellyfish line in the chorus and you think ‘oh this is a dicky little song about the ocean,'” he continued. “But if you dig a little deeper you realise it’s a song about perception and how love looks on a nihilistic backdrop – how we can pull each other out of spiralling inward. I still like the playfulness of the song though and I wanted to keep that in the video.“

The band will be heading out on their headlining tour of Australia next month. You can purchase tickets here. The band will be bringing out Teen Jesus and the Jean Teasers, and Sly Withers for support.