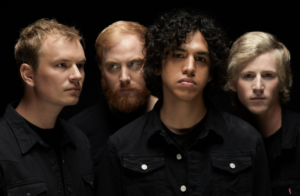 Social Animals has shared the music video for their new music video for “Get Over It,” set to appear on the band’s upcoming record Best Years, due out April 3rd. Vocalist and guitarist Dedric Clark talked about the inspiration behind the song by saying, “A lot of images from a lot of different apartments wash over me when I think of this song. It feels like I only remember the mornings. Always waiting on a text, or for someone to pick up the phone. I’ve changed my number since then. It felt natural to film the video in a similar scene, and our director Gus Black nailed the landscape from our first phone call. He understood the deliberate contrast between the energetic soundscape and the desperate lyrics, allowing us to visually mimic the ritual highs and lows of waiting around for the feel-good mailman.”

The band’s upcoming tour with Beach Slang is currently being rescheduled.