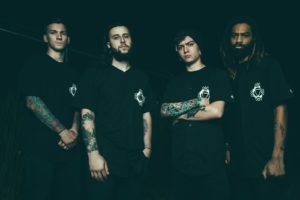 New York City deathcore band A Wake In Providence have released their new EP Insidious: Phase II, which you can stream below in full. The EP is a rerecording of songs from their previous EP Insidious, plus two new tracks “Ov Hell” and “Psycho.” Speaking about why the band decided to redo the release guitarist D’Andre Tyre states, “this EP is what helped us make a mark in the deathcore community, a big mark to some, a small to others, but one nonetheless. It marked a lot of dark times in the band, and really hits home for us as well as previous members for so many different reasons both negative and positive, but we decided to re-do it for our fans. We wanted to put this chapter of the band behind us with a bang, and really highlight what was already there as well as give it a new flare. Working with Outerloop Records and having them back this idea was awesome and it felt good to hit this one more time, and do it right. We hope you guys enjoy this and we really looking forward to hearing what you guys think about Phase II. ”