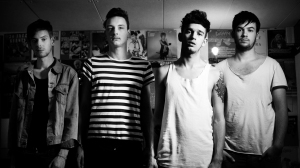 The 1975 have returned with a new single titled “Give Yourself A Try,” which you can check out below. It is the first new material since 2016’s I Like It When You Sleep, For You Are So Beautiful Yet So Unaware Of It. During an interview earlier today on BBC Radio 1, the Manchester, England group revealed that they will be dropping two albums over the course of 12 months, with the first being A Brief Inquiry Into Online Relationships, due out in October.