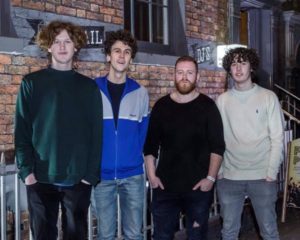 Liverpool, England rock band The Jjohns has released their new single “Sewn,” which you can check out below. Talking about the writing of the song, front man Dom Dunning says, “Writing “Sewn” was motivated by our band’s trip to Eindhoven last year, we had the Fleetwood Mac greatest hits on loop and a song that Mik [Dom’s brother & guitarist] showed me instantly hit me, I felt great… I always write in the notion of trying to create my own version of a particular song or melody and that was the case with “Sewn”. We got home from the trip and straight away me and Mik picked up the guitars and the magic happened. I always had the hook lines “you got me bad, got me Sewn girl” for a while and managed to fit it into the end of that song.”