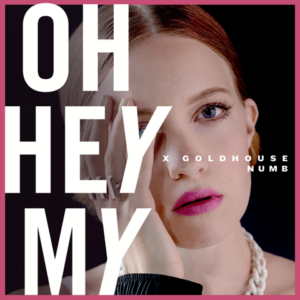 Swedish vocalist OhHeyMy has released the music video for her new club track “Numb,” alongside producer and DJ Goldhouse who produced the song. Talking about the song, OhHeyMy says, “It’s a track set in a club-environment where everyone else is focused on partying but you can only focus on this one person taking up all of your attention. A person who makes you feel high and dizzy – a sense of being numb. And all you want is to stay in that moment, with that feeling, forever.” Raised in a small village, OhHeyMy grew up listening to artists such as Bob Dylan, Crosby Stills and Nash, and ABBA, and discovered her current heavier sound when she moved to the city to start her career.