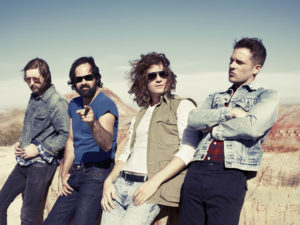 The Killers will be releasing a 10-year anniversary reissue of their record Sam’s Town, which will be limited to 5, 016 copies. To celebrate the release of the reissue, the band will be performing two shows in Las Vegas on September 30th and October 1’st at Sam’s Town Hotel and Gambling Hall. Released on October 3rd, 2006 Sam’s Town debuted at number 2 on the Billboard Charts, and was voted the most underrated album of the decade by Rolling Stone readers, despite being panned by the magazine’s staff.