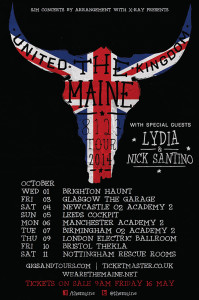 The Maine have plans to release a Forever Halloween deluxe edition album on June 17th. The standard version of the album was released last year. To kick off the new edition’s release, the band will be releasing their new single from the album titled “Ugly On The Inside” on May 21’st. The band will also be taking the 8123 tour to the UK in October. The band just finished the South American leg of the tour in the last several weeks. All information about the UK tour can be found in the picture above.

To hear snippets of the new deluxe album songs, you can listen here.