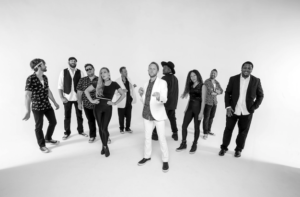 Austin band The Nightowls has released the music video for “Everybody’s Dancing To The Music,” featuring vocalist Ivan Neville. Talking about including Neville on the track, front man Ryan Harkrider says, Our producer Chris Bell is good friends with Ivan, and when we heard that he was going to be in Austin for a gig we jumped at the chance to work with him. “All of us had gigs earlier that day, so everyone was showing up to the studio a bit sweaty and ragged, but as soon as we started playing through the track, magic happened.”