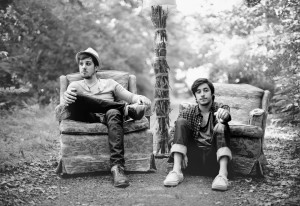 If you were on Myspace back in 2005-2006 you might remember The Scene Aesthetic, an acoustic duo from Seattle who dropped the song “Beauty In The Breakdown” (if your not familiar or just need a refresher) check out the music video for the song below. Today on the band’s Facebook page, they announced their return after being on a hiatus for awhile. To celebrate, the band will be releasing a vinyl pressing of their self-titled record that came out in 2007. There will be four color variants, limited to 250 each, along with a set of enamel pins and patches. They are available here and will ship in October.

The band will also be performing a short run of shows throughout the United States beginning on November 14th at The Mercury Lounge in New York City. The rest of the dates can be found below.