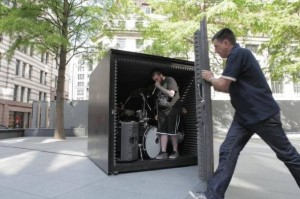 A death metal band from the UK called Unfathomable Ruination, will be doing something really stupid. As part of London’s Sculpture in the City art exhibit, the band will be performing in an sealed, airtight container until they run out of oxygen. The box comes from Portuguese artist Joao Onofre, which was influenced by Tony Smith’s minimalist piece Die in 1962. The piece has the following description:

“This is the first time that João Onofre’s work, Box sized DIE featuring Unfathomable Ruination, 2007 – 2014 has come to London, having toured extensively through Europe at venues including Palais de Tokyo and MACBA. Influenced by Tony Smith’s pioneering minimalist sculpture Die (1962), the steel box serves as a mobile location for performance. In each location the sculpture travels to, Onofre invites a local Death Metal band to play, on this occasion Unfathomable Ruination. The box is soundproofed, determining and restricting the performance’s duration to the length of time in which the oxygen is expended. Outside the cube, viewers observe its strange vibrations, only viewing the band’s entrance and exit to the performance space.”

Performances will take place on July 3rd at 6 and 7 pm, and July 4th through August 1’st at 6 pm. 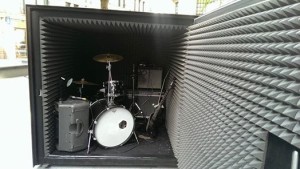 Thanks to Alternative Press for the above information.