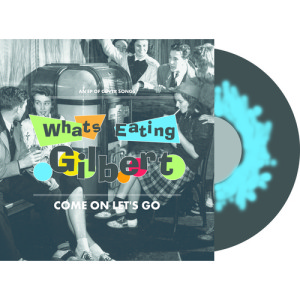 Chad Gilbert (from New Found Glory) will be releasing a covers EP with his side project What’s Eating Gilbert called Come On Let’s Go. You can see the track listing, information about the album, and a few tour dates below.

Hey Everyone! Excited to announce the self release of a new What’s Eating Gilbert 7 inch. “Come On Let’s Go” is a covers EP consisting of songs that we’ve been playing over the last year and a half of touring. A lot of you have expressed that we should record these songs and we listened!
The track listing is:

The first pressing will be 500. Colors are 200 yellow and 200 light green (both available on our NEW web store launching on July 15) and 100 light blue & black haze available at my upcoming California shows! They’ll also be some cool bundles available on the web store!

To all of you fans asking about the full length album, “That New Sound You’re Looking For” is completed and I’m anxious for you all to hear it! However the world of New Found Glory has been very busy and exciting lately with lots of fun things coming up so we’re going to hold off on releasing that until I have the time. But do not worry, it won’t be too long. Until then, stay tuned and enjoy this new ep!