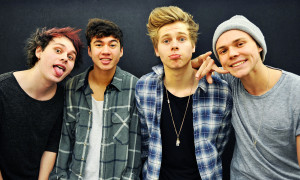 5 Seconds of Summer have released a lyric video for their new single “Don’t Stop.” The new single is available on iTunes except for the US, Canada, and Mexico stores. The song  will be released in those stores soon. The band will also be releasing the Don’t Stop EP with songs “Wrapped Around Your Finger”, “Rejects” , and a new version of “Try Hard” one of their older songs. You can watch the “Don’t Stop” video on Youtube.