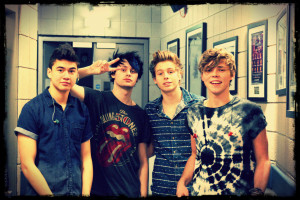 According to a press release sent to absolutepunk.net, 5 Seconds of Summer have secured more preorders of their new self titled album than any band in the history of Universal Music Group,  while their album has already peaked at number 1 on the iTunes charts in 71 countries. The press  release also announces that the band will be playing a show at The Forum in Los Angeles, California on November 15th.