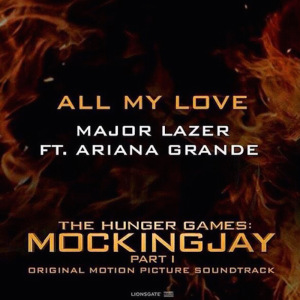 Ariana Grande and Major Lazer have teamed up for a song on the upcoming The Hunger Games: Mockingjay Part 1 Soundtrack called “All My Love.” You can listen to the track over at Ultimate Music. The soundtrack comes out on Monday, November 17th. To pre-order the soundtrack, you can pick it up on iTunes.