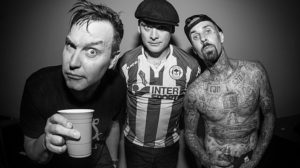 Blink 182 has dropped the music video for their new song “Generational Divide,” which you can check out below. The band will be touring across the United States this summer where they will be performing their landmark 1999 album Enema of the State in full. Neck Deep and Lil’ Wayne will be the supporting acts. The band released their last album California in 2016.