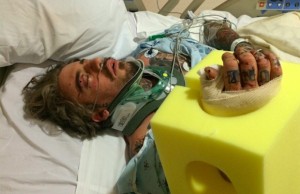 Drummer Joel “Falcon” Bourne, drummer for such groups as Tiger Army, Day of Contempt, and The Dear & Departed has been involved in a serious motorcycle accident that has left him suffering with a shattered femur, broken foot, multiple compound fractures, a dislocated wrist, and permanent loss of feeling and movement in his right arm and hand. Since his accident, Bourne has gone through two surgeries to replace bones in his arm and legs with steel rods. To cover his medical expenses as well as financial hardship for his family, a fundraiser has been set up which you can donate to here.