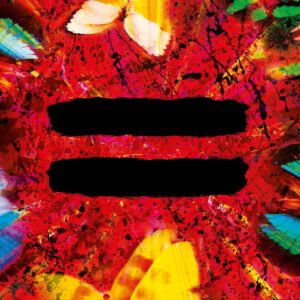 On Ed Sheeran’s new LP = (or “equal,”) Sheeran has completely changed his direction in terms of sound and songwriting topics. Coming onto the scene in 2011 with his debut +, Sheeran was the songwriter for the millennial generation, reminiscent of their parents’ generation with Carol King and Joni Mitchell taking over the singer-songwriter genre. Playing with nothing but a loop petal for a live show, Sheeran’s talent is not only exceptional, but his songs are also relatable. While Sheeran began to gradually move away from just him and an acoustic guitar on his 2017 album ÷,  on =, he experiments a more poppier sound, influenced by the 80’s, and more strikingly a full band, something that he has only dabbled with in the past.

Opening with “Tides,” we hear a bit of Bryan Adams with a fiery entrance and Sheeran’s sweet and soothing voice. Telling Zayn Lowe in an interview for the album, he is now officially an adult on this record, and as we go deeper into the album, this is definitely a theme of the LP. Married now with children, we hear remnants of this throughout, and while it might change the overall landscape of each song’s lyrical content, “Tides,” is a great song to usher in this new era.

“First Times,” is an acoustic track, reminding us of the LPs of Sheeran’s past. Obviously, a love letter to his wife Cherry, this track highlights the Sheeran we loved then, and the musician we love now. Everything about this track demonstrates Sheeran’s biggest strength which is songwriting. It is steeped in nostalgia, and one we will have on repeat for days to come. =’s fourth track and lead single “Bad Habits”, shows that Sheeran is taking a different and fresh new path, and while it’s not totally unsettling given that every artist must evolve at some point, it feels like Sheeran die-hards wouldn’t give the track a warm reception, however if its Spotify streams are any indication, the song is on fire, and it continues to be his most played track on the platform.

“Overpass Graffiti,” continues in the same vein as “Bad Habits,” with an 80’s influence, and a very interesting music video, leaving viewers scratching their heads. Despite the change in sound, the road ahead still remains bright for Sheeran and his domination of the charts when he releases new music. Tracks like “2Step,” is another guitar track and Sheeran’s vocals are serene throughout. While he continues to gush over Cherry, this is welcome, as his love songs are some of his best works across his catalogue.

The record’s 12th track “Visiting Hours,” is perhaps =’s most raw and vulnerable track. Written about Sheeran’s friend Michael who passed last year, the need and want for heaven to have a phone is relatable to everyone and has Sheeran goes through life without Michael, we ourselves step into his shoes as we listen and take in every word.

To close out =’s is “Be Right Now” a track that is probably the weakest of the album’s offerings. It feels dry, bland, and like it was placed last to fill up space. Clocking in at a little over 48 minutes, = will please others, and leave others unsatisfied, however diehard Sheerios will love drinking in every moment.

Watch the music video for “Bad Habits” below.