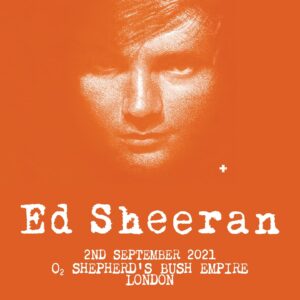 Ed Sheeran has announced an intimate show on September 2nd at O2 Shepherd’s Bush Empire in London to celebrate the 10 year anniversary of his album +. This will be Sheeran’s first live show in quite awhile, as he has taken a bit of an hiatus from performing after releasing his last album  ÷ in 2017 and becoming a father. During the COVID-19 pandemic, he has released the singles “Afterglow” and “Bad Habits.” No album release has been announced. In order to get tickets to this show, you must win them. Go here to see if you can score yourself some tickets, and for the rest of us, let’s hope there is a livestream.