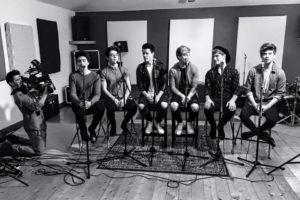 Ever since vocal groups came back into style six years ago, there have a few that have stuck out, not only for their new spin on the dormant genre, but also for their vocal ability. One of these groups is HomeTown, a vocal sextet from Ireland. Ever since releasing their self-titled debut in their home country last year, they have gained a following not only in Ireland but in other parts of Europe and America – due to the viral nature of the Internet and One Direction’s Liam Payne writing the lyrics to their hit single “The Night We Met.” While their music might be in danger of skeptics tossing their songs aside due to boy bands being manufactured, with HomeTown, it is their vocals that wipe criticism away.

Josh Gray, was a student dreaming of performing professionally, while Dayl Cronin was in England taking performing arts classes. Cian Morrin was at university studying to become a teacher, after believing that making a living as a professional vocalist had passed him by after being booted off of The X Factor UK. Dean Gibbons had been in a successful vocal group called OTT in Ireland, though they disbanded shortly before his audition for Hometown. Brendan Murray was a student busking on the streets of Galway before auditioning for the group. Ryan McLoughlin, the bands lone guitarist, was stocking shelves at a Dublin supermarket and studying songwriting, before getting the opportunity to sing in HomeTown.

The true measure of a band is not only how well they can play together, but also how they can sing together. In Hometown’s case, the latter has perhaps become the most important aspect of their music and live performances. Chosen for their vocal ability, Walsh considered it a plus that McLoughlin played guitar. When one listens to HomeTown, the first thing that comes to mind is how flawless their vocals are, as individuals and as a unit. On their popular YouTube covers of “Hello” by Adele and a mashup of “Lego House” and “I See Fire” by Ed Sheeran, HomeTown connects with their fan base by creating an environment that draws their audience in.

With singles such as “The Night We Met” and “Where I Belong” (which became the fastest charting single in Ireland upon release,) HomeTown could become the next Westlife or Take That, according to Walsh,  if the dice rolls in the bands favor. With enthusiastic fans all over the planet and plenty of views on Youtube, one may scratch their head thinking about how this group has not received more recognition. While HomeTown is still waiting to become known on a larger scale, they are slowing moving towards conquering Europe, their first market to break before hitting the United States. Performing at the Coco-Cola Music Experience in Spain in October, the performance will introduce them to a wider audience outside of The Emerald Isle.

With international fans begging to hear more tracks from their debut (no recordings of any their songs exist on YouTube, aside from singles,) the group decided to release their new single “Roses” without warning. Featuring an acoustic guitar which showcases Murray’s unique vocal ability, the tune has blown up on the Internet, allowing the group to become more noticed.

With HomeTown heading back into the studio to record new music, we hope that the band releases these songs in other parts of the world, as they are ready to become the next pop sensation.

The bands next performance will be at the Waves Festival in Wexford, Ireland on August 28th.