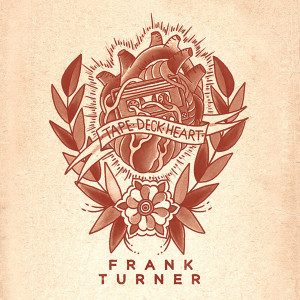 English singer-songwriter Frank Turner has just released his fifth album entitled Tape Deck Heart an ode to failed relationships and figuring yourself out along the way. While Frank’s music has folk roots, he also brings in a rock edge that makes his songs memorable and very catchy. Frank began his career as a front man for two bands in the UK including Kneejerk and Million Dead before starting his highly successful solo career with his backing band The Sleeping Souls.  Tape Deck Heart is an acoustic folk rock album that is full of catchy songs that shows Turner’s talent along with his backing band bringing flavor to his music.

The first song “Recovery” is a folk rock anthem that gives listeners a clear picture of what Frank’s music is all about.  Punchy, while at times turning things down a notch, Turner and his band are out to make the best music possible and they want their audience to enjoy the ride. The nice thing about his music is that Frank keeps things interesting by compounding folk music with more of a hardcore edge, reminiscent of his days fronting the band Million Dead.

“Plain Sailing Weather” is about making wrong decisions in a relationship, even when things were heading in a positive direction.  The song builds from a quiet acoustic track into a rock tune which is great for a sing along.  While most of the album will give fans a dose of adrenaline on nearly every song, the tune “Broken Piano” is a ballad that is nearly six minutes long, which shows a different side of Turner showing that he can write a slow song that is just as good as his faster tunes. While not nearly as exciting as the rest of the record due to its length and monotonous sound, it breaks up the reflective attitude showing more of a maudlin side of Turner’s songwriting.

The album’s title comes from having a love of music that trumps everything else in life and listeners will certainly get this vibe from listening to Tape Deck Heart. From listening to this latest effort, Frank makes music with originality that will keep drawing in new fans with each record he releases.