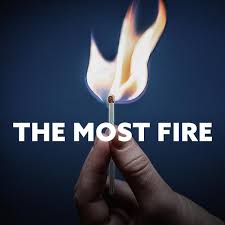 Nashville rock band Gooding has dropped their latest album The Most Fire, the follow up to their 2020 album Mayday. Getting their start in 2002 in Wichita, Kansas and eventually moving to Nashville, Tennessee, Gooding has created a career almost exclusively on touring and getting their music featured on television. Having their music featured in over 200 shows including Saturday Night Live, Dateline, and the Today Show, it is clear why the band remains popular within this space. With The Most Fire being the third release in the Hymns for Revolution series, Gooding has dropped another album that pushes the boundaries of rock music. With cinematic dark tones, feet stomping beats, and luscious vocals from Erin O’Neil, Gooding is a great band that will help you get your funk on.

Opening with “Reckoning” begins with beautiful strings, leaving us not fully knowing what to except, though as an introduction it works out well, as it glides seamlessly into “Enough” a track that fits perfectly with the record’s overall themes of love, greed, and making it through turbulent times together. As Steven Gooding, the band’s front man, and O’Neil trade vocals, “Enough” is going to certain find a spot in most anyone’s playlist if they are looking for band that writes music that feels outside the box.

“Clear-Eyed Darkness” has a similar sound, though this track feels more expansive and open than “Enough” and we lose ourselves in Gooding and O’Neil’s vocals, this certainly becomes a tune that we cannot stop spinning, and for their diehard listeners, we are sure that this will be the same for them. “California Gold” is perhaps our favorite track on The Most Fire, for its punchy guitar riff that drives the entire track from start to finish. Without a guitar riff like this, the song would sound boring and it is the first time on the LP where we feel like Gooding has really demonstrated just how good of a guitarist he is.

Closing The Most Fire with “Rebirth,” Gooding is a group that we are not hearing a lot of these days. While The Most Fire has a driving force to be memorable throughout, it is easy to see why the trio has fit so well outside of the standard rock and roll tour and radio box. Expanding their creativity to fit into television, this is a group that was made for syndication.

Listen to “California Gold” below.