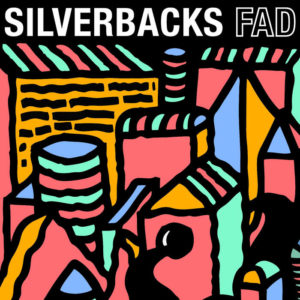 Silverbacks, a band from Dublin, Ireland has released their debut album Fad on Central Tones, an LP full of punchy tracks that will get fans excited, while setting up their sound for plenty of growth in the coming years. Releasing their first EP Sink The Fat Moon in 2018, the band has now departed from their rock inspired sound, and gone for something a bit more heavier, and perhaps more artsy, taking inspiration from the bands of the 70’s and 80’s, throwing a bit of a punk rock edge to their new sound.

Kicking off the LP is “Dunkirk” and its punk influences gives the band a grittiness to their sound that more alternative music fans will enjoy. Tracks such as “Fad 95,” sound like they take on more of a more relaxed feel, as it slightly less rough around the edges. “Fad 95” feels like it could have had a place deeper within Fad’s track listing since it takes the group in a different direction than “Dunkirk.”

Tunes like “Just in The Band” bring the bands edgier sound back into the mix. Sounding a bit like Joy Division on this track, the group sounds like they have come to visit from another era – perhaps decades before the band members were even born. While Ireland and Dublin have no shortage on talented and quality acts, songs such “Just Like the Band” bring the Silverbacks to the top of the long list of talent in the Emerald Isle.

Songs such as “Muted Gold,” is one that no one should skip over when adding new songs their playlist. Endlessly catchy, “Muted Gold” employs a simple drum beat and guitar riffs to create something that we won’t want to get out of our heads, and while it may not find its place on mainstream radio stations, the music will feel right at home a station that is less corporate, and more about playing great music.

To end Fad, is the track “Last Orders,” an alternative tune that is a memorable album closer,  one that hears lead singers and brothers Daniel and Kilian O’Kelly singing at full power, giving the song a singalong feel that you wouldn’t normally expect for this type of music.

While the Silverbacks are still fresh on the music scene, they have crafted a record that will find a home in many music collections, and there are exciting times ahead for Dublin’s next hot band.

Watch the music video for “Muted Gold” below.