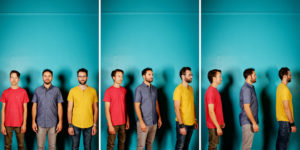 Upstate New York band Jimkata has shared their latest single and music video for “Liar With The Lights On,” which you can watch below. Talking about the songs influence front man and vocalist Evan Friedell says, “I’ve always been inspired by artists like The Police who often paired poppy upbeat music with darker lyrical themes as well as classic reggae artists like Third World and of course Bob Marley and Peter Tosh who often sang about deep political or moral issues set to an uplifting beat. I couldn’t help but follow in that path a little bit with this song, imagining a character who by day deals in lies but by night fears his reckoning.  Ultimately, it’s sort of a moral tale set to a shiny dance groove.”

The band’s upcoming record Bonfires will be released later this year.