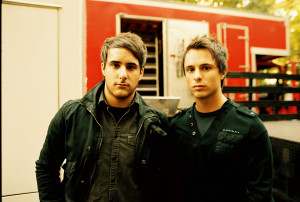 Josh and Zac Farro, former drummer and guitarist of Paramore, have ditched their plans to record with their band Novel American and form a new group with a new record. You can read the statement from Josh below:

I want to fill you in on what’s going on with me musically. Before I do that, I want to thank each and every one of you for your unending support and encouragement over the years. You inspire me to push through and create the music I was born to create. So thank you for that.

As you may know after Zac and I left the band we started the project “Novel American”. We had a great time meeting new musicians and collaborating with them. Throughout that process we could not find a lead singer. We met some incredibly talented guys, but unfortunately none of them worked out. This was a very difficult process for me because I wanted to create and perform so badly. With a lot of thought, I made the decision to sing. It was not an easy choice. Singing was out of my comfort zone because I have always been a guitar player. As I stepped out into my new role, creativity heightened and my new sound was beginning to form.

I am proud to announce that I am currently working on my new album with the incredible producer, Jacquire King. Jacquire has worked with artists such as Kings of Leon, The Editors, Of Monsters and Men, and many more. Jacquire is challenging me as an artist vocally and musically. Zac has contributed to the album by playing drums, and of course he did a phenomenal job. I hope to release this album as soon as possible. I will keep you guys up to date on singles, album releases, shows etc. as they happen. Stay tuned for the announcement of the new band name.

Thank you all for reading this and for your continued support. I look forward to sharing my best work yet with you guys!