Louis Tomlinson has announced his first solo tour in support of his upcoming album Walls, out January 31’st. The tour will begin on March 3rd, in Barcelona, Spain and end on July 23rd in Vancouver, British Columbia. Tomlinson’s latest single titled “We Made It” is out now. The music video can be seen tomorrow. 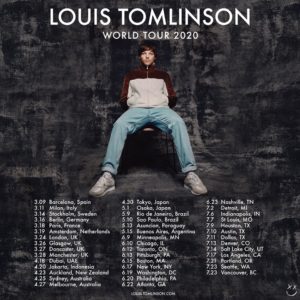