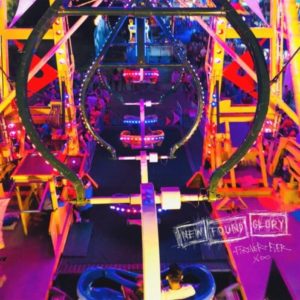 Through their 20 plus years as one of pop punk’s most well known bands, New Found Glory has stuck gold again with their new album Forever and Ever + Infinity, a 15 track album that takes the listener through stories of small towns, relationships and lust that only a band like New Found Glory can. Stepping away slightly from their typically bright pop punk sound, the band cling to their hardcore roots, going back to their original sound that longtime fans will remember on their first few albums. Working with producer Steve Evetts on this album gives the Florida based band more of a DIY sound as Evetts is known for working with bands who are developing their sound.

Opening with “Shook By Your Shaved Head,” the quartet hits listeners with a fast track that feels ruthless and painting New Found Glory in a different light. While the opening track does not sound as polished as previous album openers, “Shook…” sounds familiar enough where longtime fans will not be swayed, but anyone new to the band will immediately welcome their harder edge. “Greatest of All Time,” is next and while it is the album’s lead single, it stands to be the perfect album introduction if it had been first in the track listing. Loud, fast, and catchy is something New Found Glory has always been brilliant at, crafting songs that never grow old and stale, and while we often see bands change their sound often on new albums, New Found Glory have always been content to keep their influences and overall sound intact. While this makes them slightly predictable, familiarity is never a bad thing.

“Stay Awhile,” the LP’s fifth track, is about starting a relationship in a small town as the band harkens back to their teenage years of hanging out in parking lots and naming the traits they love about that special someone. While this would seem out of place for any other band in their 40’s, New Found Glory has continued to nail the memories and euphoria of childhood and the freedom that comes with this, one of the qualities that makes New Found Glory a great pop punk act.

Tunes such as “Trophy” come much later in the album and its fast speed will inspire plenty of mosh pits and crowd singalongs, something that the band has thrived on since the beginning. Bringing about a party atmosphere, “Trophy,” is a track that listeners should not skip over. Ending the album is “Slipping Away,” clocking in at just over five minutes, one of the longest songs the band has written in their career. One of the band quiet strengths was their slower tracks, and while we heard a lot of this on their 2006 album Coming Home, the band has shied away from this on more recent releases, and to finally have this back is a welcome breather, though it feels like an odd song to end Forever And Ever + Infinity with as the album is such a ball of energy, “Slipping Away,” feels like an energy depletion that the band didn’t know where to place, except at the end of the record.

While Forever and Ever +Infinity will not go down as one of New Found Glory’s best albums, it highlights their strengths, while cementing why they have lasted so long amidst the come and go trends of pop punk.

Watch the music video for “Stay Awhile” below.