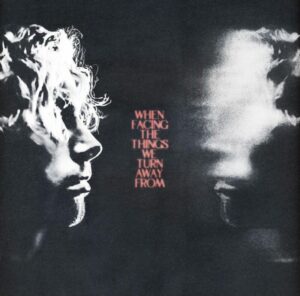 Starting his career as a teenager in the Sydney, Australia band 5 Seconds of Summer, guitarist and vocalist Luke Hemmings, has released his solo debut When Facing The Things We Turn Away From, and surprisingly it sounds like a fresh debut from someone who is looking back and reflecting on the last decade of their career. When 5 Seconds of Summer released their self-titled debut in 2012, the band shot to fame while opening the Australian leg of One Direction’s Take Me Home tour (the quartet was luckily discovered by One Direction’s Louis Tomlinson through a random stumbling onto their YouTube channel.) With a pop-punk sound that had been dormant for many years, after the genre’s crash and burn in the mid 2000’s, 5 Seconds of Summer’s guitar-driven style made the band incredibly popular among the teenage demographic, though after their third album Youngblood, they changed their sound drastically, sounding much more grown up and slightly edgy.

On “When Facing the Things…” Hemmings sounds like he is coming into his own, taking the 80’s inspired sounds of 5 Seconds of Summer’s more recent work, and creating something that is soulful and beautiful. Opening with the lead single “Starting Line,” the track opens with a soft piano and the tuneful vocals that Hemmings has become known for in his previous work. While the lead single isn’t the most upbeat, it sets the stage for a young man writing some of his best songs to date. Next up is the LP’s fourth song “Place in Me,” an acoustic track that shows Hemmings’s strength as a songwriter and musician. Reflecting on his time with a lover, perhaps his current relationship with vocalist Sierra Deaton, of Alex and Sierra fame, the acoustic guitar throughout provides a beautiful backdrop to Hemmings layered vocals. Accompanied by a piano that sets an almost somber mood throughout the tune, “Place in Me” is perhaps the albums best offering, as Hemmings sets himself apart from his band mates as a solo artist.

“Slip Away” is another acoustic track that continues to round out Hemmings’s debut. Vocally, Hemmings stands out in particular here, as we realize how steady and assured his voice as he talks about what seems like a short relationship gone awry. Hemmings always sound best when he’s behind a guitar, and “Slip Away” reinforces this. Closing out the LP with “Comedown,” Hemmings closes out an album that can stand entirely on its own, and while Hemmings may not be well known within the music industry as a stand-alone musician, if you are just discovering Hemmings for the first time, When Facing The Things We Turn Away From is a great place to start, and won’t make you feel like you’ve missed out on his previous endeavors.

Listen to “Place In Me” below.