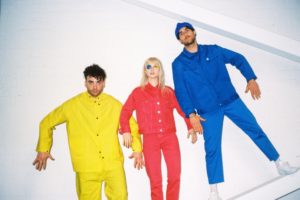 Nashville rock band Paramore will be releasing their new album After Laughter on May 12th. The band has also released the records lead single “Hard Times” which you can listen to below and watch the music video. Taking on more of an 80’s sound, the group which now consists of front woman Haley Williams, guitarist Taylor York, and former drummer Zac Farro (who is now back in the band permanently after departing in 2010) has changed their style dramatically after releasing their self-titled LP in 2013. While Paramore has veered away from their signature pop punk sound that made them famous, “Hard Times” still rocks hard enough to reassure fans that they can still play well. And with Farro now back on the drumming throne, their sound feels much tighter and defined, providing Paramore with a rhythm section that gave them plenty of notice when they were first coming up 12 years ago.

Watch the music video for “Hard Times” below.