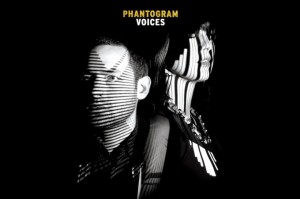 On their latest album Voices, Phantogram has written a more unified and musical album that is more mature sounding than their debut album Eyelid Movies. While the Greenwich, New York duo comprised of Sarah Barthel (vocals and keyboards) and Josh Carter (guitar and vocals), have maintained the same electronic presence that we heard on the last album, Voices feels more put together since it doesn’t feel like certain sounds were thrown together at random. The group also toys with a more rock and roll sound allowing them to explore another genre. The band was formed in Greenwich, New York in 2007. Shortly before the two began writing together, Sarah was pursuing a visual arts degree but was dissatisfied with her decision, and her future band mate Josh was living in New York City playing in an experimental rock band with his older brother. Bored with their chosen life paths, the pair decided to move back to their hometown and start a band. They decided on the name Charlie Everywhere, eventually renaming themselves Phantogram, named after an illusion where two-dimensional objects appear to be three dimensional. They released five EP’s before releasing their debut album in 2009 titled Eyelid Movies.

The album’s first single “Fall In Love” captures the bands new sound, with Barthel’s silky vocals being the song’s biggest highlight. The nice thing about the band’s music is that is has the potential to appeal to everyone even if you aren’t fond of electronic music since they try their best to make their genre sound accessible through rich vocals and a tight command of their instruments, and on Voices they succeed beautifully. “Never Going Home” the album’s fourth track is an acoustic cut that has a trancelike quality with both Josh and Sarah providing vocals, which gels together well with the tunes softer feel. “The Day You Died” has Josh playing electric guitar, and while that would not normally fit into this type of music, Josh’s guitar is gritty enough to where the tune has a sound that is similar to indie rock band The Strokes, giving the band the ability to saddle both genres with confidence.

Overall, there is nothing bad about Voices and fans will be delighted over the bands new music, and new fans will keep Voices on repeat.