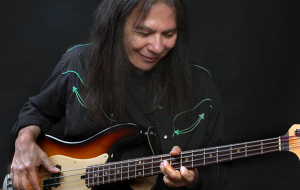 Bassist Rick Rosas, known as the bassist for Neil Young, has passed away at the age of 65. A cause of death is currently unknown. Rosas played on six Neil Young albums between 1988 and 2009, while also performing on many of Young’s tours. He also played bass for Crosby Stills & Nash on their final tour in 2006, as well as performing with Buffalo Springfield on their recent reunion tour. Rick was known among the music community as “Rick the Bass Player.”