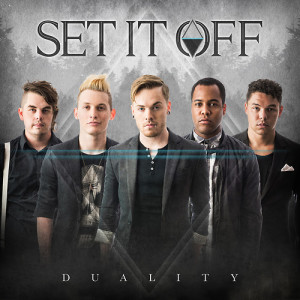 Below, you can get all of the details about Set It Off’s new album Duality, set to be released on October 14th. You can also check out the albums tracklisting and new tour dates.

Tampa, FL’s Set It Off will release Duality, their sophomore full-length album, on October 14 via Equal Vision Records.

“I’ve always been borderline obsessed with the notion of duality. Something about the juxtaposition of two polar opposites seems so vulnerable and blatantly human to me. Everyone has two sides, the side they let people see and the side they hide. In this record I decided to bare exactly who I am and what I go through in my day to day life. Love, heartbreak, sex, alcohol, happiness, sadness, anger, the human experience. I want you to hear this record and experience every human emotion you’re capable of feeling,” shares Carson.

“It’s not just the lyrical content that represents duality, the instrumentals portray it as well. You’ll hear dark, minor verses that transition to bright, happy choruses. Just like our lives, the great involuntary, impulsive non-stop roller coaster ride. I’m sick of fake people and watching them skate by with the idea that it’s okay to put on an act to gain confidence and trust in their peers. Allow me to be the first to tell you this about myself: I am good, I am evil. I am solace, I am chaos. I am human, and that’s all I’ve ever wanted to be. Be human with us and show us your true duality.”

With Duality, Set It Off has expanded upon their signature cinematic sound, creating their most memorable and cohesive work to date. The forthcoming album also features impressive guest vocalist spots from Jason Lancaster (Go Radio) and William Beckett, and was included inAlternative Press’ ‘Most Anticipated Music of 2014’ Issue.

During the inaugural Alternative Press Music Awards, the band revealed a sneak peek at the new album by premiering a clip of “Why Worry”, which can now be found HERE.

This Fall, Set It Off will share the stage with Black Veil Brides and Falling In Reverse on a massive US tour, which will kick off on October 21 in Niagara Falls, NY and run all the way through December 15 where it will wrap up in Albuquerque, NM. All upcoming tour dates can be found below.

The orchestral pop-rock quintet is currently on a full US co-headline run with Our Last Night, featuring support from Heartist and Stages & Stereos. The incredibly successful run has seen sold out shows at a majority of the dates including Los Angeles, New York City, Philadelphia, Orlando, Vienna/DC, Pontiac and Salt Lake City – with many more expected before it concludes on August 22.

This new album is the follow up to the band’s debut full-length,Cinematics, which was originally released in September 2012 and re-issued as an expanded edition the following summer. Cinematics’ impressive debut earned the band charting positions on the Billboard Top 200, Independent Albums, and Heatseekers charts.

Duality will also be released in partnership with Rude Records in the UK (October 13), Europe (October 14) and Germany, Austria and Switzerland (October 17), and with UNFD in Australia/New Zealand.

+ OLN 10 Year Anniversary Show: Our Last Night and Set It Off w/Class of 92 (Matt Arsenault of A Loss For Words), Heartist and Stages & Stereos