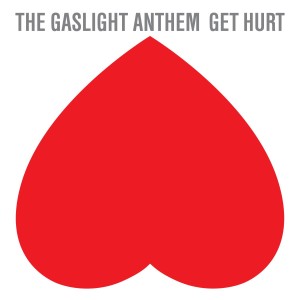 The Gaslight Anthem have always written songs that are honest and raw, and on their new album Get Hurt, we hear that once again, though this time they have extended their boundaries to see how far they can go. While this works on some songs, overall it falls flat when listening to the album as a whole. The group began in New Brunswick, New Jersey in 2006 after guitarist and vocalist Brian Fallon began a band called The Charming Man. Eventually the band changed its name to The Gaslight Anthem and released their first album Sink or Swim in 2007. The band has gone on to release The 59’ Sound (2008), American Slang (2010), and Handwritten in 2012.  On Get Hurt, we hear a number of influences and a band that is trying their hardest to break away from their punk roots. On the record, we hear the band becoming grittier, harder, and for Fallon a little more far reaching when it comes to his vocals. We hear the guttural quality in his voice, along with his desire to sound like Eddie Vedder, the front man of Pearl Jam as the band has cited Pearl Jam’s album No Code as a huge influence on Get Hurt. Though instead of the booming edge of Pearl Jam, we get a band that is trying to sound bigger than they are, but there are moments where it sounds like they won’t quite make it. However, there are some songs that are notable and will make long time supporters of the band reminisce over the groups past.

Get Hurt’s opening track is “Stay Vicious” and for anyone who has heard past Gaslight Anthem albums, they might feel let down as the song opens with a nondescript drum beat and a muddy guitar riff that leads into one of the most mundane songs on the record. While this might be a change in direction for the group, longtime fans will be listening and wondering what the future holds for the band. Nothing about “Stay Vicious” sticks out, and while it will let fans down with its boring vibe, they will need to listen further to start to appreciate the records highlights.

The second track “1,000 Years” is a straight ahead rock tune that will bring fans back to American Slang with its rock feel that makes different parts of the record highly listenable, energetic, and fun. The riffs in the song are vibrant, with rhythm guitarist Alex Rosamilia getting his chance to shine right along with Brian, as they play some of the punchiest riffs of the album on “1,000 Years.” At this point, we get the feeling that the band has finally found their footing, and while they have reminded fans that rock and roll is what they do best, some of the tracks going forward still don’t have the same pull and energetic style of the bands they are trying to imitate. “Underneath The Ground” has a much more laid back pop vibe than “1,000 Years”, and while it has its bouncy moments with a jingle like keyboard part, the tracks drags on without any direction. The riffs on the song are calming and the drum beat is a solid one, but after the forceful entrance of “1,000 Years”, “Underneath” has no qualities that make it a memorable track, and runs the risk of being buried amongst previous songs that The Gaslight Anthem have written.

“Rollin’ and Tumblin’” gives the band the rock and roll attitude we have been hoping to hear for the first half of the album, and once the first half is finished, fans may begin to question whether changing the bands musical style was a good plan, as they can’t decide exactly who they want to be on Get Hurt. The song has energy and grit, and while the band plays well on this track, it sounds like they are trying to force the harder edge, which doesn’t sound convincing, as the band has cited influences from bands that are much more hard hitting. The last two tracks “Break Your Heart” and “Dark Places” are tunes that represent the band well. The band has always nailed it when it comes to writing solid guitar driven tunes and while “Break Your Heart” is an acoustic number, it gives fans the right amount of emotion to the often times lackluster record, with Fallon toning down his Eddie Vedder desires and singing with an earnest that we can’t help but latch onto. “Dark Places” really feels like a closing song that sums up the road the band has chosen to take. While the band has strived to mix up their sound and try something different with their music, the band should stick to what they know, and after listening to the album, following the same road as Pearl Jam isn’t the best direction for them to be going towards. While there are some iffy moments throughout Get Hurt, the group has certainly tried their best with experimentation despite a few flaws.