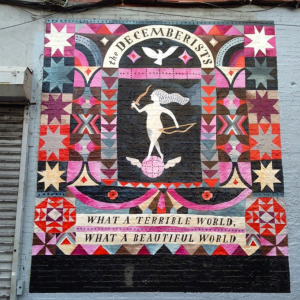 The Decemberists have announced that they will be releasing a new album titled What A Terrible World, What A Beautiful World. A release date has not been set. Front man Colin Meloy performed a new song from the album titled “Make You Better” at the unveiling for the album artwork. The mural for the artwork (above) was unveiled in Brooklyn yesterday morning. You can watch Colin’s performance here.