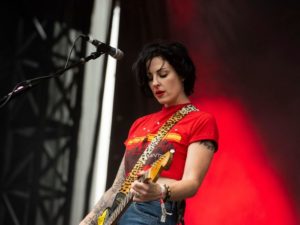 Los Angeles punk band The Distillers has released their first new song in 15 years titled “Man vs. Magnet” which you can listen to below. The band is best known for their 2002 album Sing Sing Death House. The band split in 2006 and came back together earlier this year after front woman Brody Dalle posted a cryptic photo on her Instagram account. She dropped her solo album Diploid Love in 2014.